One of the most powerful developments in recent years has been the creation of “cloud computing.” Folks familiar with the technology know that it’s essentially doing for your computer what email services like Gmail and Yahoo! have done for your communication–they’ve taken your messages, contacts, and other personal information and stored it on secure servers across the nation to make it easily retrievable in the case of an emergency or hardware failure. Instead of relying on a single storage point (your home PC, for example) to store all of your communication, Google, Yahoo, and dozens of other websites offer to handle of those tasks in exchange for showing you advertising or using some non-identifiable information to craft better algorithms.

For most people, the immediate benefit of these systems was apparent. Access your mail anywhere, store contacts somewhere that won’t be affected in the case of a system crash or loss of a single device (like a phone), and integrate these services with your web browsing. Easy, and powerful. The systems that provided these services long ago have evolved significantly, now allowing entire operating systems to essentially run through your broadband connection, piping only the data necessary for input and allowing massive supercomputers to handle all of the processing.

That all sounds fine and good, but what does it mean for you?

Cloud computing, so named because of its pseudo-omnipresence, changes the role of computers significantly. They no longer exist as a single point of storage for all your information. Instead, the computer is more of a gateway, a portal to your data that is stored in massive servers. One analogy I can draw is that of a dry cleaner. With the old model of computing, it was as though you were standing at the front of a dry cleaning factory trying to look for a specific shirt. You might not even know where the shirt was located, but you’d still have to find it yourself. With the advent of search, that process was trimmed a bit- you tell someone else what to look for and where to look, and they find the shirt.

Now, with cloud computing, we see that yet another layer of interaction is slowly melting away. We’re doing away with the fetching entirely. You don’t even really need to know where you’ve stored your data, you just need to run a search, and you can pull down results from the stuff you have stored locally on your computer as well as the files floating up with the sun and moon. We are no longer limited by how much space is on our devices, how much storage we can buy. The only limiting factor is the infrastructure that connects all these devices together. Some people have asked me, almost accusingly, “Well what happens if the network goes down? What then, huh?”

If the entire United States suddenly experiences a simultaneous and catastrophic shutdown of all of its network infrastructure, we will have much bigger things to worry about than listening to our music or accessing the documents on our cloud folder. That’s akin to asking what would happen if all paper in the United States suddenly caught fire. I don’t want to hypothesize about the events or circumstances that would need to exist in order to facilitate such a terrible reality, but, assuming it was both spontaneous and total, I doubt anyone would be worried about their fourth grade diary.

In recent news, we’ve heard rumblings of Apple’s new iOS 5 being cloud-based, a total overhaul of the OS. I can’t even begin to fathom what that means. The OS seems just fine as it is, but the cloud is where it’s at these days, and that darn data center that’s been occupying so many of my thoughts and predictions seems like the perfect use of all those massive petaflops (or whatever they use to measure data centers of that magnitude). It all seems to be coming together now.

What we will start to see is more unity across Apple’s various OS products. Remember back in 2005, when Steve was asked what kind of OS the iPhone was running? Does anyone remember his response? Let’s recap, shall we?

“Yes it does. The entire OS is gigabytes, but it’s data. We don’t need desktop patterns, sound files. If you take out the data, the OS isn’t that huge. It’s got real OS X, real Safari, real desktop e-mail. And we can take Safari and put a different user interface on it, to work with the multitouch screen. And if you don’t own a browser, you can’t do that,” said Jobs.

This shift is not overnight, and it is not a new direction for Mac OS. Once Apple began work on the iPad, they started planning for this shift, possibly even before that. I seem to remember some folks discussing the origins of the iPhone, how it was actually rooted in an experimental side project that Steve Jobs somehow got a look at and recognized as brilliant, and that said side project was actually more akin to the iPad than the iPhone. At any rate, it looks to me as though Apple has been planning this shift for years, possibly even the better part of a decade. I believe that Apple designed iOS with unification in mind all along, seeing a desire to create a powerful OS for new mobile devices that hadn’t even been developed yet. It seems fairly obvious when you look at their last “Back to the Mac” event, and even more glaringly obvious when you see something like this coming out of Gizmodo.

Adobe demonstrated Photoshop for iPad yesterday. Not a sub-product like Photoshop Express, but the real Photoshop, with a new skin. Sure, it doesn’t have some of the advanced print and web publishing oriented features of the desktop behemoth. But it has everything you need, from layers compositing—including a 3D mode to show people how they work—to what appeared to be non-destructive adjust layers, levels, color controls, and all the features I use every day in the desktop Photoshop. From the little we have seen, the application was fast and smooth.

I believe Apple has succeeded in ushering in a new age already; I can’t wait to see them throw the doors wide open to a future we’ve only dreamed of.

The Future of Mac OS

Some advantages of the newly integrated suite of server administrative software include a guided setup process for configuring a Mac as a server; “local and remote administration – for users and groups, push notifications, file sharing, calendaring, mail, contacts, chat, Time Machine, VPN, web, and wiki services – all in one place”; “simple, profile-based setup and management for Mac OS X Lion, iPhone, iPad, and iPod touch devices” with Profile Manager; Wiki Server 3, designed to make it “even easier to collaborate, share, and exchange information”; and WebDAV services that give iPad users “the ability to [wirelessly] access, copy, and share documents on the server from applications such as Keynote, Numbers, and Pages.” 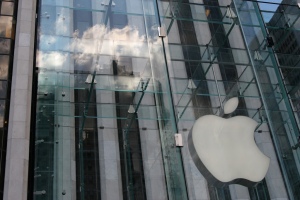 What we’re seeing is a paradigm shift in home computer usage.  More and more people are shifting away from traditional desktop configurations for their everyday computing and adopting the iPad as their primary method of getting access to the information they want.  This as inevitable as it is surprising.  Inevitable, because mobile computers have increasingly become the focal point of the technology world; surprising, because it happened so fast and so definitively.  I need more than the fingers on my hands to count the number of people who use the iPad as their primary computer.  As they become more powerful and ever more portable, that number will increase.

iPad sales have also been staggering, especially when compared to other manufacturers (HP, Samsung), and has captured huge percentages of the market (even markets that don’t even really belong to it).  Hence, people are starting to wonder if it makes sense to even own a computer if this sort of thing starts becoming the norm.

Unfortunately, the iPad still needs to sync to something, and this something is quickly changing into less of a computing device and more of a server.  The fact that Lion (Mac OS 10.7) will essentially allow any Mac owner to function as a server is quite interesting, and I believe it shows Apple’s future plans under the surface.

Apple likes Mac OS, and believes that it will survive for a long, long time.  I agree with this, but I believe that the Mac OS will shift subtly away from its current place as the OS that people see to the OS that works under the surface.  It’s a powerful statement about the future roles of the “computer” and “user.”  In Apple’s future, the “computer” should be invisible, providing a means for people to access what they need, when they need it.  The “user” simply gets access to what he or she wants through one of the many pipelines that transfer his or her data.

This is a trend that I have been participating in for a while, through apps like Simplify (RIP) and now Audiogalaxy, LogMeIn, and Air Sharing.  The whole idea is that my iPad serves as a window/portal to everything that I may need.

Introducing a “server” option to a standard install of Mac OS Lion is Apple telling the world that soon, the computer they have sitting in the den will grow wings and live in the cloud.