Was perusing my Apple feed when I came across this headline:

I’m still amazed that there are companies out there who believe that subscriptions on the iPad are a bad idea, or that they need to test the waters. That’s insane. What these companies need to understand is that the iPad does, certainly, represent (or stands at the forefront of) a digital publishing revolution. I could get the New Yorker Twitter feed, I could subscribe to the RSS feed, but it feels different when you see the class New Yorker covers splayed on your screen in glorious color. It’s a good app, and it’s a good experience (unlike the absolutely horrendous, awful, want-to-vomit “The Daily” app). 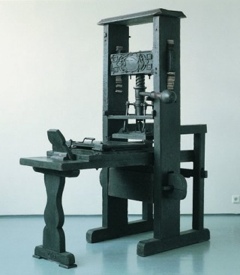 This is exactly what so many people are afraid of with subscriptions. Let’s pause for a moment and look at some other examples of where people thought Apple’s App Store was going to be some sort of godawful den of iniquity (granted, with the initial onslaught of fart apps, that was a distinct possibility).

We’ve got this example about the 99 cent apps that people are so afraid of. Articulate and accurate, if I don’t say so, myself.

Then there’s some of this fear-mongering that hit the interwebs right after the opening of the app store.

Can we see a pattern here? Everyone panicked when apps were selling for $0.99, and now the dollar apps are the way to financial independence. Develop an amazing app, sell it for a dollar to a million people, and you’re set for the next few years. Sell it to five million, and you can buy a house. Subscriptions don’t need to be expensive, folks.

What will start to happen is a dramatic shift in how people actually start to read, how they get their media. The current model is, well, free. RSS dominated for a while, and Twitter started stealing some of RSS’ thunder. Some folks (like me) still like RSS, but I recognize that it’s not the only way of getting news out there. There’s a whole wide world of content that is waiting to be discovered and digested, and people who (up until now) had no way of feeling comfortable breaking into that world can suddenly have access to it in a very easily accessible manner.

Publishers are upset by their sudden restrictions. Just last month it was OK for all these subscription-based or -focused publishers to make all sorts of money off of their customers. There were no transportation fees, no raw material fees, none of that. Just what they paid their developers and writers, but they were already doing that. They had a low-overhead way of distributing their product to lots of people. There were, however, two problems with this model a) the previous subscription process was cumbersome at best and user-hostile, at worst; b) very few publications actually had subscriptions, and people were confused by them (Go to the site? Register? What happens when I’m on my iPad? Do I have to go through Safari?). Again, not optimal. Furthermore, there were (and are) lots of people who want to get paid for what they write, and carving out a place for oneself in the world of publishing demands a not-insignificant amount of research, hard work, and do-overs. The world of writing is a tough one to make it in, mostly because the signal-to-noise ratio is getting lower every day (as I wrote about in this post), and publishers want to make sure they’re paying for quality.

What if, however, it were easy to publish, build a subscriber base, and make a name for yourself? What if there was a system in place that exposed your work to millions of people who are already invested in a thriving digital ecosystem? People who are used to and demand curated, well-researched news sources? Perhaps people with a little more green in their wallets? Or perhaps people who are moving up in the world?

This model is not for the established and entrenched giants of publishing, who will attempt to nickel and dime their subscribers and who are too anachronistic to develop truly compelling and groundbreaking digital publications. This model is for the new media, for the folks who want to reach as many subscribers as they can with their good ideas; for the new media consumers, the folks who want those same good ideas but don’t want to load their minds down with ads about “weird belly fat tips” and think that maybe a dollar is a good price to pay for a month’s worth of strong-voiced columns. This is throwing open the gates to the publishing world and finally making it accessible to all the guys and gals with the good ideas but not enough time to eat or sleep and for SURE not look for an agent.

When people speed down highways and sidestreets, they’re often banking on the kindness of the local law enforcement to look the other way, letting the folks driving five to ten miles-per-hour over the limit squeak by.  People are thankful for that, in a way, but they also come to expect that sort of leniency everywhere.  Small towns that rely on speed traps for revenue won’t be so forgiving of the lead-footed among us, and some folks get mad about that.  They have no right, of course; they were speeding, but that doesn’t stop them from being upset.

Enter Apple, who made news once again this morning with their apparent “rejection” of Sony’s Reader app.  People were all up in arms about this move earlier (prematurely, if you ask me), and only slightly changed their tone as more details began to emerge.  Then, we were treated to this tasty morsel:

“We have not changed our developer terms or guidelines,” Apple spokesperson, Trudy Muller, told The Loop. “We are now requiring that if an app offers customers the ability to purchase books outside of the app, that the same option is also available to customers from within the app with in-app purchase.”

Now it’s getting tasty.  Apple is now reeling it in.  They created their “walled garden” and, despite all the protests and ballyhoo about the whole kit and kaboodle being “closed,” people absolutely loved to play in it.  Everyone wants in on a piece of the iOS pie; now that they’ve bitten, Apple is bringing them in to play by the rules that were so clearly laid down at the outset.  Basically, this:

Except now it’s apparently choosing a different way to actually enforce those terms, which makes the report seem accurate after all.

So now we have an interesting predicament.  Apple is effectively charging other companies for the content that these other companies’ customers have enjoyed on Apple’s hardware using Apple’s operating system, marketed through Apple’s App Store.  Seems almost fair, doesn’t it?  It seems as though Sony is more than a little upset about the whole thing, but I think John Gruber has a good take on it:

My guess is that Sony is getting hurt because they were late to the game. Amazon’s Kindle app precedes the existence of Apple’s in-app purchasing API. I thoroughly doubt Apple is going to pull the Kindle (or Nook) app from the App Store, but I’ll bet they’re already in discussions with Amazon (and Barnes & Noble) about how these apps need to change going forward. It’s easier to reject Sony’s app as a first step toward the application of new rules because Sony’s app is brand-new — Apple isn’t taking anything away from users that was previously available to them.

Sour grapes, indeed.  But there’s more here, as usual.  This could spark a price war in the ongoing  struggle between Apple, Amazon, Barnes & Noble, and (to a lesser degree) Borders.  If Amazon wants to keep its margins, it’s going to have to jack up the prices (still one of the aces that Amazon holds) or end up losing profits to Apple.  If Amazon exercises this option, people will undoubtedly be upset because that competitive pricing that Kindle owners are so famous for flaunting will have disappeared.  If Amazon does nothing and allows in-app purchasing at the current price points, Apple still gets a cut of each book sold and suddenly has a whole lot more money to throw at publishers to get their books into the iBookstore (if they even want to do that).

Ultimately, theres a lot of interesting stuff that this is beginning to imply in Apple’s future posturing and the continued role publishing will play in hardware sales and long-term sales strategies.